Boys & Girls born on or after January 1, of the year specified:

This is a Class I & III Tournament open to USYSA & US Club Soccer affiliated teams, sanctioned through CYSA-South.

Boys and girls teams must be affiliated with USYSA or US Club Soccer. Each team must produce valid laminated player identification cards or equivalent national association identification. All teams must comply with USYSA or US Soccer Club travel procedures. We do accept AYSO & Recreational League credentials. All player cards must be issued by the same governing body.

All decisions of the Tournament Director, Tournament Operation Manager, Field Marshals, and Referees are final.  NO PROTESTS WILL BE ALLOWED. Only the Tournament Director can make decisions relating to the interpretation of the Tournament Rules. Disputes relating to the interpretation of these rules will be resolved with the administrator/coach that are registered with the involved team(s). Individuals may not represent a team if not registered as an administrator/coach with the involved team(s).

Team credentials: player cards, medical release form (registration forms) and the team roster are required to be verified by the Tournament Committee before your first scheduled game.

A completed Game Card from each team is required before each match, including Semifinals and Finals.

Choosing teams for the Premier, Championship & League Flight for each division will be determined by the Tournament Committee. Not every division will have more than one flight.

The referee’s decision is final concerning whether a player will be permitted to play with their existing equipment and physical condition (knee braces, cast, etc.)

Both, the Champion and Finalist will receive awards and are both expected to participate in the Award Ceremonies. Any team who does not comply will be reported to the their State Association, League, Club Board of Directors and Club Director of Coaching. We promote good sportsmanship at our event whether you win or lose.

There will be no time allowance for injuries. The in-charge referee cannot extend the specified game time without the consent of a Tournament Committee Representative.

6 points for a win

3 point for a tie

0 points for a loss

Maximum limit of 3 goals will count towards goals scored, goals against and goal differential

In the event there is a tie in the standing after the qualifying matches or a wild card determination, the following method will be utilized to resolve the tie:

5. Most shut-out victories (forfeits not counting)

6. FIFA Kicks from the Penalty Mark

If more than two teams are tied at the end of preliminary rounds, the tie breaker criteria list shall be used in order shown to advance or eliminate teams. Once one team advances or is eliminated and if the remaining two teams are still tied, those two teams will then be compared beginning with criterion 1 (Head to Head) to determine ultimate placement. (See different examples below).

Head to Head cancels out since all 3 teams either beat or tied each other.

In this above example Team A is first place, Team B is second place and Team C is third place.

Head to Head cancels out since all 3 teams either beat or tied each other.

In this above example Team C is Eliminated. Since Team A and Team B are tied, those two teams will then be compared beginning with criterion 2 (Head to Head is canceled out due to three way tie rule) to determine ultimate placement. In this case, Team B has 2 goals allowed and Team A has 4 goals allowed. Therefore, Team B is first place, Team A is second place and Team C is third place.

Every team plays 3 matches. The top two teams with the most points will advance to the Championship game.

Only Second Place Teams from each pool can advance as a Wild Card. If there is a tie for Second Place in pool play, the Standing Tie Breaker Rule will determine the Second Place team. Penalty kicks will be taken thirty (30) Minutes before the scheduled start of the Quarterfinal or Semifinal game. Any additional conflicts with Wild card teams will be resolved by the Tournament Directors.

Will consist of three (3) Groups of four (4) teams each. Each team will play the other teams in its Group for a total of three (3) preliminary round games.

If a team forfeits due to a no show or not having enough players during the preliminary round, the following will apply “Forfeit one-forfeit all”. If a team forfeits in a later round, only that match will be forfeited. If a team doesn’t have their player cards present by the end of the match, only that match will be forfeited. Games will be recorded as a 1-0 victory for the opposing team. Any team that forfeits will be reported to their State Association.

Turn in Player ID Cards and Game Card to the Field Marshal for check-in 30 minutes prior to game time. All matches will have a 5 minutes grace period to appear with at least 7 players (2007 thru 2001), 5 players (2010 thru 2008) to avoid a forfeit. The home team is the first team listed in the schedule, has choice of field side, must provide the game ball, and must change jerseys in the event of a referee determined color conflict with the opposing team. Teams and spectators must be on opposite sides of the field or as instructed by tournament officials with teams being on one side and spectators on the other. Spectators on the opposite side must mirror their team.

Any player receiving a double yellow / red card or coach receiving an ejection shall be ineligible to participate in the remainder of that match, plus the following match. Tournament Director and Referee Coordinator will evaluate all red cards.

All spectators must always be at least 2 yards away from the sideline. This rule will be enforced by the Referee Field Coordinator and Tournament Officials.

Withdrawal from the Tournament

No refund will be allowed due to forfeit of any game by any team accepted to the tournament. Any team that withdraws from the tournament after the team has been accepted on or before November 19th, 2019 will not receive a refund of any kind.

In the event of inclement weather, which the Tournament Committee deems as being unsafe for the players and/or the fields for competition to continue; or the unexpected termination of the match, the following system for determining the winner will be implemented:

Matches that are at the half time break or in the second half of play will have the score stand.

Matches that are less than 20 minutes into the first half will be deemed not to have been played.

Matches for a given day may be postponed and played the following day, if fields are available.

Note: that it may also be necessary to change match locations in the event the assigned fields are unavailable for play, for any reason.

If the Tournament is canceled due to the Inclement Weather prior to the start of competition, teams will be issued partial refunds as determined by the Tournament Committee, after a reasonable amount has been deducted for incurred tournament costs.

Substitution shall be allowed at the following times:
Pursuant to current FIFA Rules.

Tournament Directory/Site Manager may shorten games as necessary to make sure all matches scheduled on a given field are played. For example, a field running behind schedule due to an injury or unexpected delay may have all remaining games shortened by few minutes each game so that each game gets played.
Tournament Director or referee may suspend any match or tournament in consideration of safety to players or damage to fields in event of inclement weather under any circumstances. Partial refunds for cancelled or suspended games will be considered by the Tournament Committee to determine the extent of a refund but said refund will not exceed $100 per game. 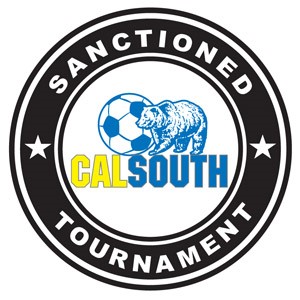